Hello quilters!
I can't tell you all how happy I am to report that I can honestly say that I quilted all weekend and i wasn't even on a retreat!!  How cool is that?! 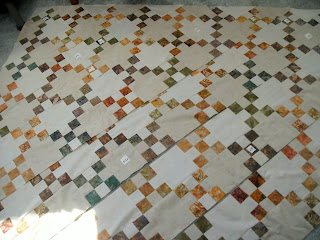 First of all I pulled out my Dessert Nine-Patch quilt that I put away back in November.   I started this way back in August!  You know how it is ~ Christmas projects take precedence at that time of year and I had to put this one aside.  Well I got it out and just couldn't stop working on it.  I finished piecing the rest of the nine-patches and then laid it all out on the floor to arrange it into something pleasing.  I got the lay-out done on Friday night. 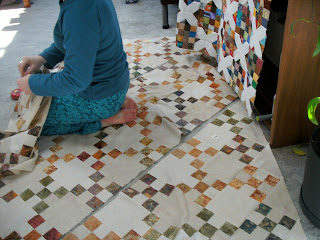 Saturday came and I continued to pin the rows together and sew - and pin - and sew.  And yes, once again, I was in my pajamas while sewing.  That's probably one of my favorite things - sewing in my PJ's!

I worked on this until the top was together.  It was a nice relaxing day! 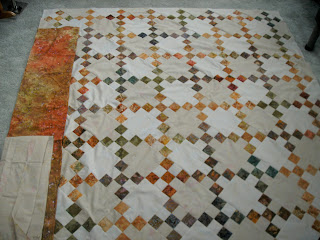 At this point the pattern finishes but I thought that the quilt looks unfinished.  I started going through my stash and found that orangey-yellowy batik that is in some of the nine-patches; but, I don't have enough to do long boarders. So, now I'm toying with the idea of doing pieced boarders.  Maybe a square in a square boarder with the rust in the center.  I do have enough of the darker background batik but I don't think that will be enough of an impact for me.  So I hung this quilt up while I pondered my options. 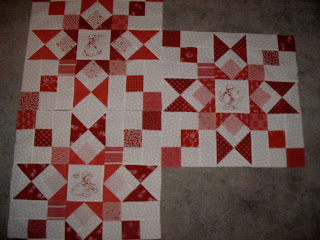 Next, I pulled out my red and white quilt.  This quilt has been put away for a while (yes, yes in the closet) with all the fabric washed and pressed and the red-work embroideries finished.  I finally pulled it out and pieced 3 of the 15 blocks.  These blocks are really big! 20.5" unfinished!  I found the pattern in a 2009 Love of Quilting magazine but the blocks weren't big enough to incorporate the embroideries so I re-drafted it in EQ and came up with these blocks.  They are large but I think that that quilt is going to be really nice. 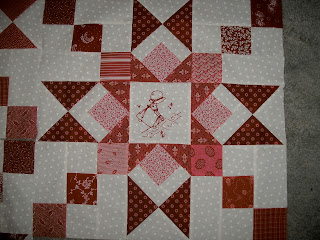 Here's a close-up of one of the blocks.  A couple of the patches look pink in this picture but rest assured they are not pink in real life.

Working with these vibrant fabrics and pure tones of reds and whites is really making me happy.  I love working with a white back-ground instead of cream lately.  For the longest time I worked almost entirely with cream back-grounds but lately I've wanted to lighten things up and work with whites instead.  It's really a nice change and I am enjoying it.

So quilters ~ what did you all work on this weekend??

I love both quilts! I worked on cutting strips to make a quilt bigger then was planned.and a pincushion and hot pad, no pics to post yet.

I enjoyed seeing the quilt projects you are working on.

I love anything Sunbonnet Sue. That quilt is so pretty. I just came home from a quilting retreat and finished two quilt top ufos. I recently did the Paddlewheel quilt pattern by Thimbleberries which says to use white to beige fabrics which I thought I would go beige but I resisted and used mostly white and really loved the effect. I guess I will be buying lots more white fat quarters. 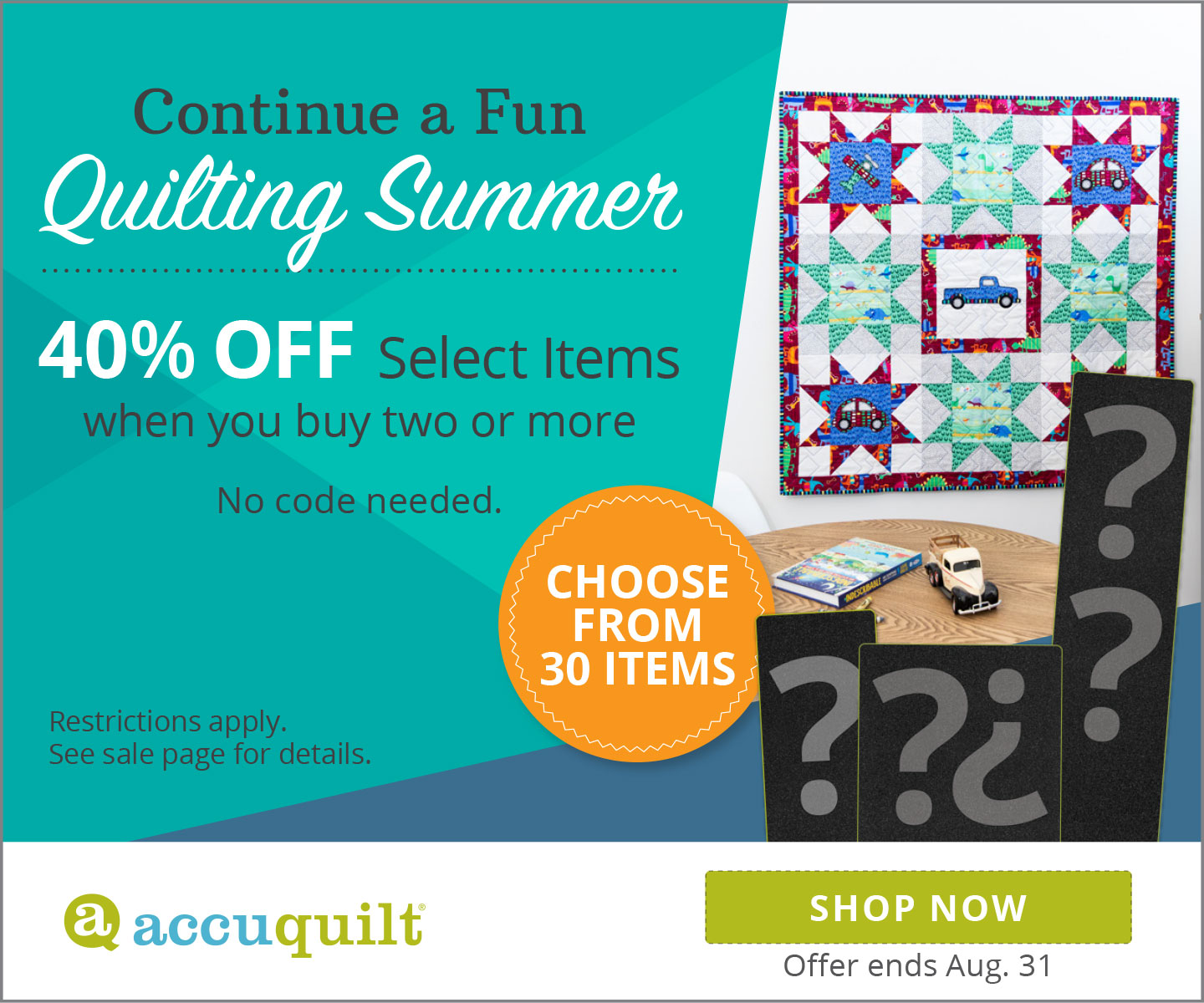